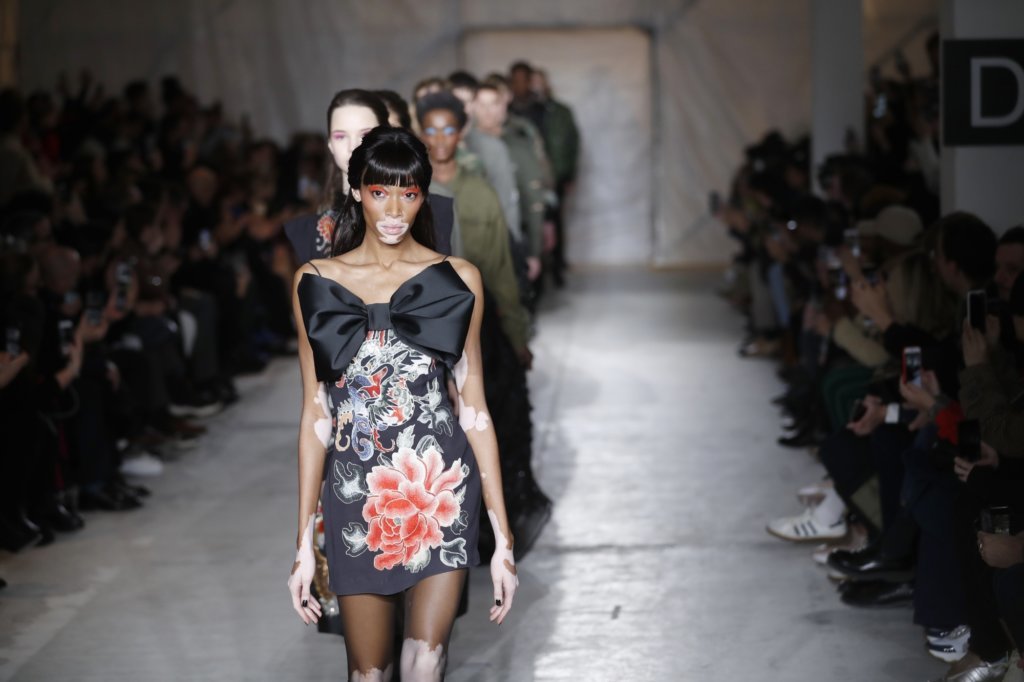 MILAN (AP) — Nowhere is the transition in the fashion world more evident than during the menswear preview shows in Milan taking place on the second of three days Sunday.

Only in Milan does three days make for a Fashion Week; the Paris menswear calendar claims a full six days.

Gucci and Giorgio Armani are both skipping the menswear cycle for next winter in Milan and offering co-ed shows in February, while maintaining a presence this month with other events. Armani opened an exhibit at his Silos museum of portraits by French photographer Charles Freger. Gucci is hosting a performance on the closing day at its Gucci Hub.

Her latest collection had a strong military silhouette, but offset with whimsical details.

‘It came out naturally,” Prada said. “I didn’t know that I wanted to do it, but the only thing I had in mind was military.”

But the collection had more than one mood, alternating between the disciplined feel of double-breasted jackets fastened closed with a triple belt and the rock-and-roll of bare chests adorned with chunky male necklaces under open jackets.

Ever playful, Prada softened the military looks with fuzzy, colorful patches on the shoulders, like epaulets, and tufts of colored fur accents peeking out of caps.

The soundtrack included harder-rock versions of music from the “Rocky Horror Picture Show” and “The Addams Family.” Prada said she wasn’t necessarily a fan, but was fascinated that the writer who created Frankenstein’s monster, Mary Shelley, initially had to publish under her husband’s name.

The designer punctuated the show with looks for women, including tailored suits with external bustiers, cocktail dresses with elegant necklines and romantic full skirts with crystal accents. A cargo dress in fitted black was paired with a furry, red safari hat.

“It is almost two collections. I am not trying to do one thing that works for men and for women,” Richmond said.

Richmond embroidered Japanese tableaus on recycled military garments and bags for men and decorated recycled Levi’s with sequined wings across the hips for women.

“We don’t have to make more jeans. There are already so many jeans in stock,” he said.

For men, he stuck to the tried-and-true Doc Martens footwear.

The designer said his exhortation to reuse, recycle and reduce is not a one-off for this season. “This is a theme forever,” he said.

NEW RULES IN THE FASHION WORLD

Richmond said the rule book in the fashion world has been thrown out.

“Instagram primarily has changed the landscape,” he said. “We can’t turn back the tide. We have to accept it and enjoy it and make it work.”

The designer showed menswear and womenswear collections that he already started selling at the beginning of the year, grabbing buyers’ attention early. Consumers want the runway garments they see on Instagram immediately.

By the time womenswear shows come around next month “it’s too late. Some buyers aren’t coming back anymore,” said Richmond, who splits his time between Naples and London.

“Maybe in the future we will have shows that are more in season,” he speculated.

Some brands already are experimenting with the fashion calendar by offering see-now, buy-now capsule collections.

“Above all, we stopped being too nice,” Rizzo said backstage. “There was always this vein of sarcasm. We said enough.”

For women, a pretty sky-blue shirt cinched at the waist and featuring a sheepskin turtle neck was worn over a gray Bermuda-length skort. With cold weather in mind, the pair layered pants under skirts. One silver sequin skirt was worn over lightweight wide-legged trousers, with a lemon yellow Henley top.

Menswear included a dramatic, oversized white cable-knit tunic with leather sleeves and detailing, worn with trousers cinched at the ankle.

“There aren’t even slogans or mottos (on the garments) anymore. In fact, there is a beautiful plain white shirt that symbolizes the idea we have now, ” Rizzo said.

The collection also featured tailored outerwear for both genders. Looks were finished with double beanies with ear covers, leather and PVS bags and proprietary sunglasses.

Quoting former race car driver Mario Andretti, Giorgetti’s invitation advised: “If you have everything under control, you are not going fast enough.”

Flames licked at the ankles of jeans worn with a turbo-emblazoned white T-shirt, then exploded on to a shirt-cut jacket and trousers. A Fair Isle knit blurred from orderly zig-zags and diamond-shapes into speedy waves, tucked into red leather pants with black stripes.

Giorgetti’s double-breasted overcoats weren’t so stuffy they couldn’t be worn with a hoody and layered with a furry parka. Bombers and overcoats featured manga cartoon prints. Washed-out denim jackets came lined with lambskin and paired with matching jeans.

Giorgetti, who often takes inspiration from his native Italy, also celebrated Europe with the words Eur-Hope quilted into leather jackets or emblazoned on knitwear.

Copyright (C) 2019 The Associated Press. All rights reserved. This material may not be published, broadcast, written or redistributed.

SAN DIEGO (AP) -- President Donald Trump says he has ended "catch-and-release" for asylum seekers, but in cities on the U.S. border with Mexico it is catch and…

Hamilton creator Lin-Manuel Miranda has released a remixed version of a song from the hit musical featuring former President of the United States Barack Obama.…

PORTLAND, Ore. (AP) -- The last year was a 12-month champagne toast for the legal marijuana industry as the global market exploded and cannabis pushed its way further…

American Youth Football, is a organization, dedicated to promoting the wholesome development of youth.

White Customer Attacks Black McDonald’s Employee in Florida — And the Manager Does Nothing!

Voluntary bodies are being invited to deliver the GBP1.1m first phase of the Safeguarding Training Fund Voluntary organisations have been invited to apply to deliver…

The benchmark S&P 500 stock index rose within striking distance of [...]

Boeing Co may have to book billions of dollars in additional charges r [...]

Exclusive: Europe regulator to clear B ...

Oil prices fell nearly 1% on Monday after comments from a U.S. officia [...]

World stock indexes rose on Monday as hopes for resolving the U.S.-Chi [...]

Embraer SA on Monday announced an order worth $1.4 billion from Flexje [...]

Talks to reach a settlement of thousands of lawsuits stemming from the [...]

Colorado became on Monday the second state to drop out of an effort by [...]

Shares of Peloton Interactive slumped 6% on Monday, even after a multi [...]

The collateral damage of the United States' trade wars is being f [...]

China is seeking $2.4 billion in retaliatory sanctions against the Uni [...]